In my years at UVa, David has emerged as one of the most fun –if not the most—academics I have met. He’s not just all grace and charm: he is a person of moral courage as well.

I met David through Janna.

My friend Jeff Miller, a Ph.D. student in history, kept telling me that he enjoyed reviewing books for the Virginia Quarterly Review. One day I got around to accompanying him to the VQR office, where Janna was hard at work (and that’s another story!). I liked her immediately and starting stopping by the VQR regularly. I looked forward to chatting with Janna even more than looking through the pile of books available for review.

One day I informed Janna that I had received an offer to teach bioethics at the Cleveland Clinic; I was struggling with the question of what to do. Imagine my surprise when Janna informed me that she had not only lived in Cleveland for years but also in a very small town in Pennsylvania ten minutes away from the small town in which I had grown up. Here was a woman who could understand me. She warned me against the gray weather in Cleveland, and I stayed in Charlottesville.

She told me about her past and her new husband, a guy named David who taught in Spanish. She was surprised that I did not know him. She told me all about the storybook courtship (he had swept her off her feet) and shared with me the pictures.

Then one day he showed up at the VQR, and I met David.

I was working in the Office of the Provost at the time, and we were all preparing for a big event President Casteen had been planning for ages: Virginia 2020. The idea was to try to project from where we were in 2000 what UVa would look like in the year 2020. What were our goals? Where did we want to be? Once the actual summit occurred, I had to choose from a number of competing sessions led by faculty facilitators previously appointed by the President’s Office. I chose David’s, thinking it would be the most fun.
I remember clearly what happened at this session: About thirty or thirty-five people sat in a circle, with David at the head. He asked us what we hoped for in UVa’s future. One woman identified herself as a professor in the nursing school and responded that she hoped women students would be treated as the equals of men in 2020. She added that she regretted her own college experience, when male professors would habitually favor men over women in class discussions. Silence, David asked in a sympathetic tone whether she thought women were under-privileged at UVa today, and the woman paused dramatically. When she began to respond, David briskly cut her off, “Oh, who really cares what you think? Let’s hear from someone else, someone interesting.”

For a split second I worried that David had lost his mind. The stupefied woman gaped at David, and, unable to control myself, I burst out laughing. I realized that David was joking, joking in a risky way. When the entire room next erupted in smiles and nods, I understood that David was a real character.

I liked David more and more and occasionally chided him for not teaching Catholicism. He loved Spain with a passion and wanted his department to be the best in the entire country. He agreed that Catholicism was an integral part of Spanish culture but didn’t seem the least bit inclined to add this subject to his department’s course offerings.

He did, however, agree to visit my “Cultural Catholicism” seminar in Spring 2005. It was one of the most animated groups I’ve had at UVa; we met in the luminous space of the Jefferson Debating Society (on the Range, very close to Janna’s office). Spain was voting on gay marriage in 2005, and the American media were following the polls closely. The pope himself visited Spain and pleaded with the people, his people, not to vote for it (they did). David won over my seminar with his easy intelligence, and at least one of my students asked him to be his academic advisor that day (Chad O’Hara).

I continued to get to know David and Janna better. I never exploited my friendship with the CLAS’s most popular boy until Karin Wittenborg in 2014 asked me to chair the University Library Committee, which had been a pretty lifeless group. I leaned on David to join, and once he agreed, I was ready to contact several in-demand professors and ask, “David Gies is on this committee, won’t you join it?” Each signed up.

In 2016 David and I were recruited to join the search committee for the new Dean of the University Libraries. Lots of meetings. David flavored the many routine steps with his puckish wit.

Nothing moved me more deeply, in retrospect, than something David observed in January 2018. I had just returned from five weeks in Italy, and he invited me to his condo for lunch – just the two of us. We discussed his imminent retirement and I asked how he felt about his closing career. His answer surprised me: he had been disappointed by academics — most of them are cowards, he lamented. Instantly I admired him more than ever before. Not only because he was right, but because I grasped that he is not. 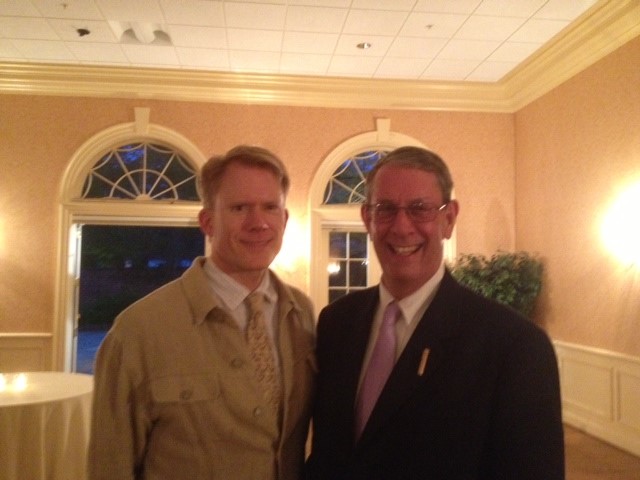