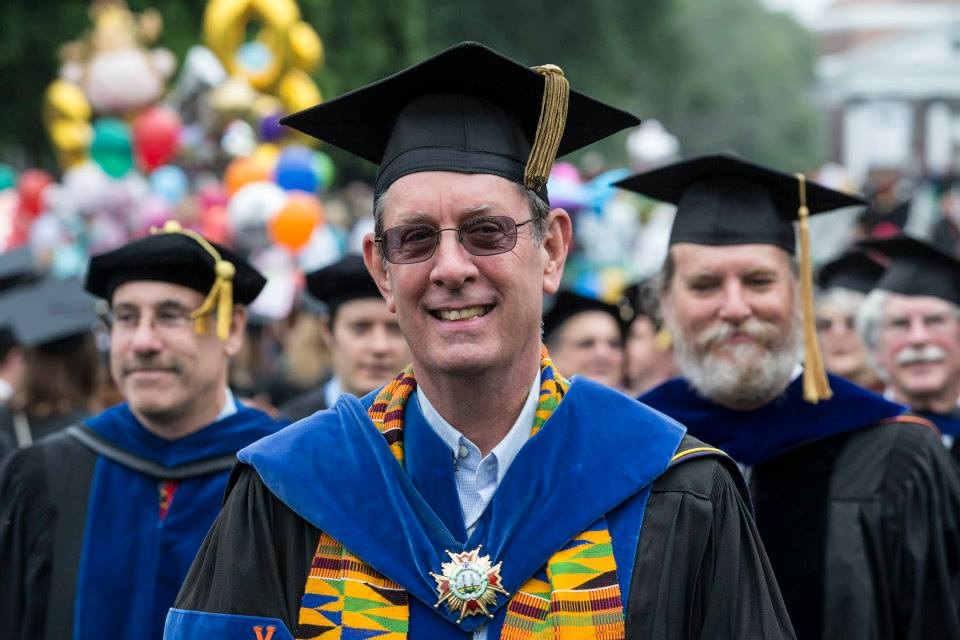 This site was created in celebration of David Gies, Commonwealth Professor of Spanish, upon his retirement from the University of Virginia in May of 2018, after almost four decades serving as professor of Spanish literature and culture; academic adviser to countless undergraduate and graduate students; Chair of the Department of Spanish, Italian and Portuguese; Chair of the Faculty Senate; and Dean of Semester at Sea, among many other roles.

When we approached David about organizing a festschrift volume in his honor, his response was that he didn’t want one. “They’re expensive and no one reads those anyway!” he exclaimed. He just wanted to hear from his colleagues, students and friends, “on a blog” he suggested. Thus the impetus for this site, which was coordinated by Jeff Bersett and Betsy Lewis.

A biographical sketch gives an overview of David’s accomplishments and the many accolades he has earned, while his curriculum vitae gives an even more detailed view of his impressive productivity and contributions to UVA and the profession.

The homage greetings, memories, and tributes posted from many of David’s colleagues, students, family and friends collectively speak to his influence on the University of Virginia, Hispanism, and the Charlottesville community.  They also document David’s important contributions to the university,  his field of of eighteenth and nineteenth-century Peninsular Spanish studies, and to the creation of the strong academic programs of study that the Department of Spanish, Italian, and Portuguese offers today.

These contributions of text, images, and video are searchable by various categories: by institutions (Asociación Internacional de Hispanistas for example), by relationships (former students for example), by institutions (University of Virginia for example), and by author. We’ve collected the many photographs submitted into several photo galleries.  Lastly, the section “Visualizing David’s Impact” uses some digital humanities tools to look a his career in some different ways. We use Voyant text analysis tools to compare posts on the site from different categories to reveal his impact in various settings. We also have mapped his professional networks of colleagues and students, which radiate from Charlottesville across the world.

David’s colleague David Haberly remarked in his post that David “is  simultaneously enlightened and romantic in all the best senses of the terms.”  He is head and heart, and we hope this site is not only able to give that sense of David Gies, but also to reflect our love and admiration back to him.

We would like to to thank all of the contributors to the site, as well as those who responded to a survey to help us collect information for our visualizations. We would also like to thank Professor Alison Booth and Jeremy Boggs of the UVA Scholar’s Lab, Lauren Work of UVA’s Simpson Library, along with Kris Shaffer of the University of Mary Washington’s Division of Teaching and Learning Technologies for their guidance on this project.