How do you talk about a legend? Because for many of us that’s what David is: a renowned scholar in the field of 18th-19th-century Spain who is also legendary for his unflagging energy and his generosity to colleagues and students. I first met David at a conference when I was a newly minted assistant professor and looked to him for advice. Whether I asked questions about publication venues or wondered about the proper balance of research to teaching, he never steered me wrong. In those early days, travel funding to professional meetings was especially meager; in between our occasional reunions at MLA or NEMLA our friendship flourished through the exchange of letters. Eventually email replaced snail mail, which meant our conversational exchanges occurred more reliably and with greater speed. (BTW, David is a wonderful epistolographer whose letters are predictably smart and witty). These exchanges have always been sustained by David’s intellectual curiosity and his genuine investment in others’ successes, both professional and personal.

In the intervening years I’ve been privileged to present papers on panels that David organized. Public speaking doesn’t generally make me nervous but the threat of exceeding the allotted time and incurring David’s irritation always compelled me to read and reread my paper, stopwatch in one hand and blue pencil in the other, making cuts where needed. This was another lesson from David, about consideration for fellow panelists and the need to keep one’s own academic ego in check. Even from his lofty perch as editor of Dieciocho and Caballero de la Orden de Isabel la Católica, he’s continued to mentor students and junior colleagues, read their manuscripts and write reference letters, and fulfill his commitments with rare dedication. Some years ago while serving as Chief Reader of the AP Spanish Literature and Culture Exam reading, I invited David to Cincinnati to give a guest lecture to the assembled college and high school faculty. I was dumbstruck when he shared with me at dinner preceding the lecture that his mother had passed away during the previous 24 hours. He could easily (and justifiably) have canceled this engagement. But, no, as he explained, her death—not unexpected and at an advanced age—needed to be viewed as the capstone to a full and rich life that he and his siblings would continue to celebrate; meantime, he had a commitment to fill to all those professors and teachers who would be in the audience. If there’s a better example of what makes humanists ‘human,’ I have yet to encounter it.

Then there’s David the gastronome, something I got to experience firsthand when we coincided in Barcelona at a symposium organized by the Sociedad de Literatura Española del Siglo XIX. With one free day before returning to the U.S., David had rented a car and invited me to join him and Janna on an excursion to the Dalí Museum in Figueres followed by lunch at a hotel restaurant that one of his many Spanish friends had recommended. The building’s unassuming exterior didn’t prepare me for the experience that awaited us: Tuxedo-clad waiters glided through the dining room, wheeling carts on which they custom-tossed salads for patrons and delivered courses from an exacting menu whose exotic offerings included tordo and helado de hierbaluisa. The food was, unsurprisingly, exquisite. Here, too, in matters of food David never steered me wrong. The day concluded with a stop at the parador in Vic and drinks on the terrace overlooking the Sau reservoir and the distant mountains. (See accompanying photo). Although I’m currently sitting in my Atlanta office with a less than picturesque view of an athletic field, I again raise my glass to David—a master teacher in the arts of what truly counts—and look forward to everything he will accomplish in his next act. 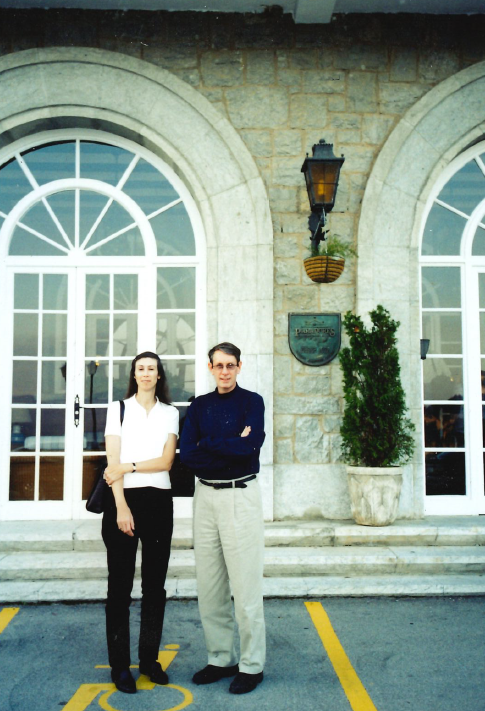